I love primitive crafts. I love their simplicity and grubbiness! Back in September I shared a primitive pumpkin patch with you. Today, it’s a primitive snowman. The inspiration for the project I’m sharing with you today is this cute snowman that I found on Pinterest. 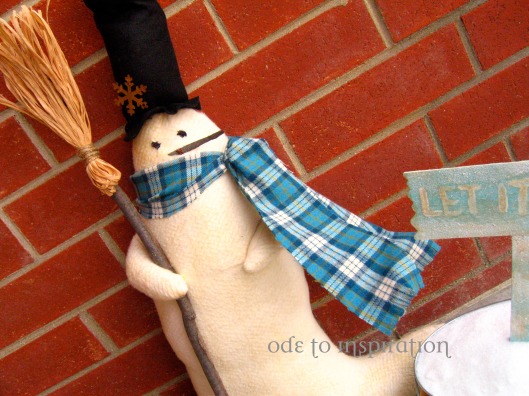 I worked with material I already had on hand. From all the baby blankets I have done, I have so much quilt batting scraps. The width of the batting I had wasn’t wide enough to make him as fat as the original, but it still worked out. We’ll just pretend my guy melted away his fat…hehe. Don’t you wish it was that easy! 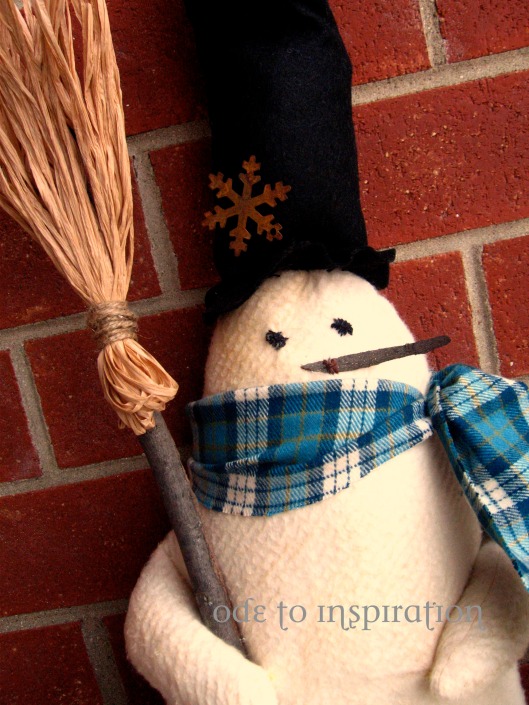 I made the hat out of felt, and I’m sure you recognize his rusted tin snowflake from the winter wreath I shared with you in the last post. I thought it added a nice and simple touch to his hat. His scarf was cut out from flannel fabric. He looks all bundled up in his teal flannel scarf, doesn’t he? :D To give the scarf the “blowing in the wind” effect, I wrapped floral wire around the knot of the scarf, and then let the ends of the wires go under the ends of the scarf. For the eyes, I used embroidery thread, and I broke a bit off of the branch I used for the broom to make his nose. 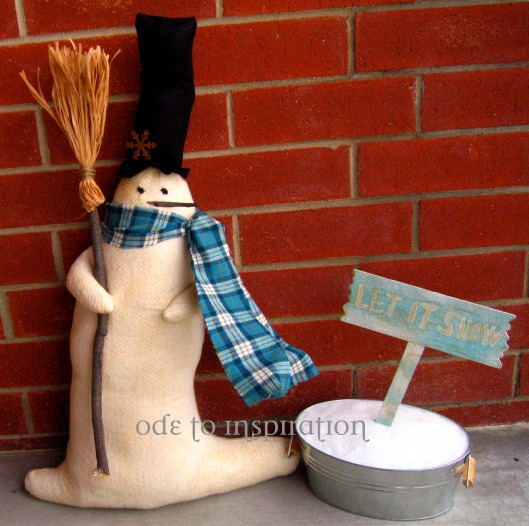 What do you guys think of his broom? Hehe. That was fun to make, but at first I wasn’t sure how to go about the straw end. I had a branch and raffia ribbon. As those of you that have worked with raffia know, raffia ribbon curls and refuses to go straight! After a bit of contemplation, I decided to Mod Podge the strands! As I added the Mod Podge I pulled them straight, and kept “brushing” them to keep them straight as the Mod Podge dried. Once dry, TA DA, I got myself a broom! There were those three strands that strayed to the left, but I think that gives the broom character… it says “I’ve been used”:D

The last fun part was making the sign. I first stained the unfinished wood with primitive staining brew (used on snowman too), which I purchased from The Ragged Fence. Then I spray painted it aqua blue. Once dry I just sanded it just a bit. I hand painted “Let It Snow”, and once the letters were dry, I stained them. Lastly, I sprayed it with Snow and sprinkled some glitter for some sparkle. I filled a tin container with epsom salt, and stuck the sign right in. 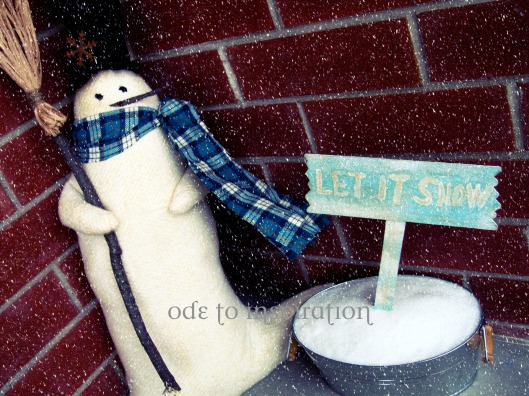 Phew! I was worried that he was starting to melt! Hehe;)

I don’t have a name for my snowman yet. What do you guys think I should call him?

I hope you enjoyed this post. As always, I would love to hear your thoughts:)

Don’t forget to check out the linky parties where you can find me and my awesome fellow crafters! Come share something you have made or just show support to the host and the other crafters:)

Have a wonderful weekend! Bundle up if you need to!

© Maysem Hammad and Ode to Inspiration, 2011. Unauthorized use and/or duplication of any material on this blog without express and written permission from this blog’s author and/or owner is strictly prohibited. Excerpts, pictures and links may be used, provided that full and clear credit is given to Maysem Hammad and Ode to Inspiration with appropriate and specific direction to the original content.
Loading Comments...
Comment
×
%d bloggers like this: